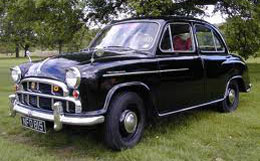 Greased Lightning started as a 1955 Morris Oxford 4dr sedan and was donated by Aldon Auto to the Citadel theatre for their production of GREASE and in Back to the Eighties (2008) for the Bev Facey Musical Theatre and Drama Program.

The set building team modified the 4dr sedan into a two door convertible, the power train was removed and a primer and rust paint job was applied. Greased Lightning is now self propelled
by a 12 volt motor {Compliments of Don Lawrence}.

When it was decommissioned it began a new theatrical life in high school productions around Northern Alberta and is available for volunteer productions free of charge.

Many thanks to Trudy and Kirk Harrold of Lamont for continuing to care for Greased Lightning, the new paint looks great.

Transportation is the responsibility of the production group using it.